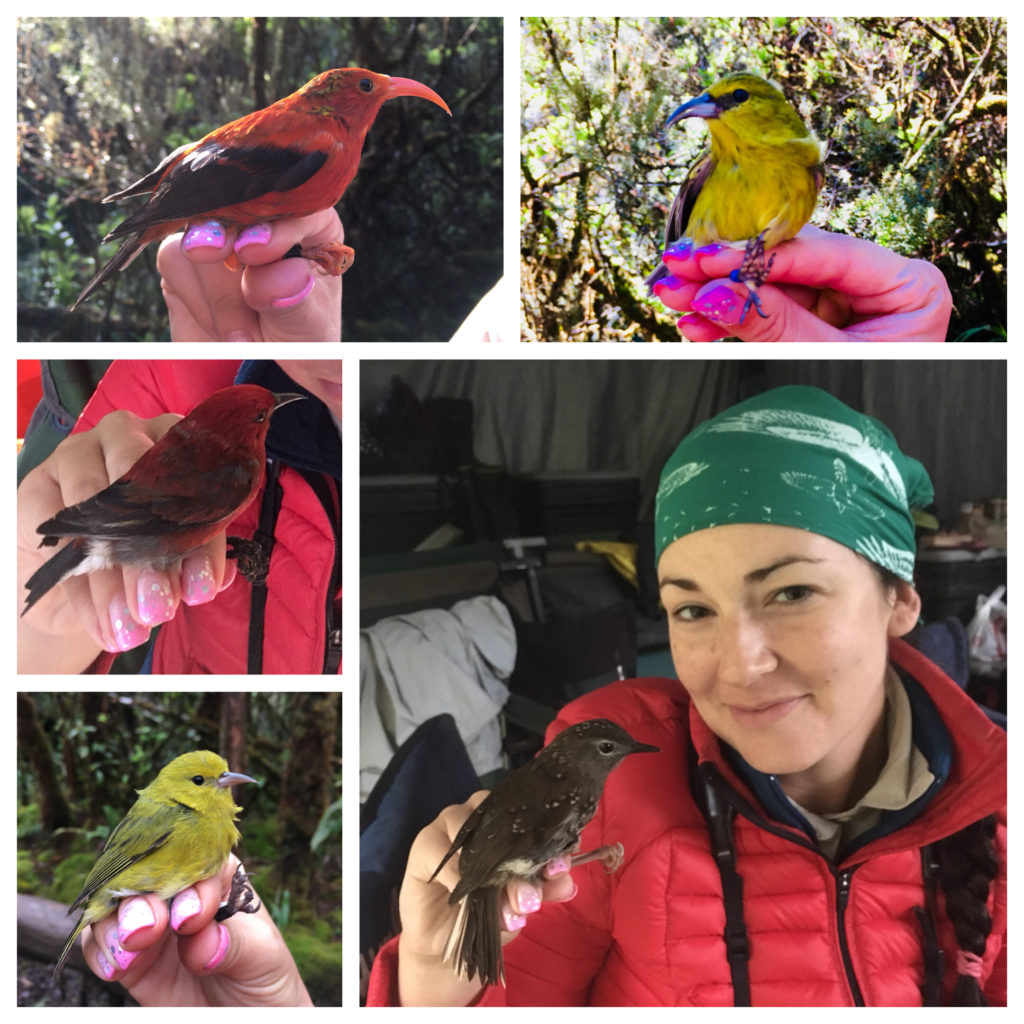 Day 2 of volunteering with Kauai Forest Birds Recovery Project was the one of the best days of my life!

We started off our morning by opening some of the mist nets we had already set up around camp and taking some down to prepare to band birds in two separate locations.
Ornithologists have been banding birds for centuries, although the first scientific study system in North America didn’t start until the early 1900s. Wild birds are carefully caught in nets by trained and licensed researchers to tag individual birds. The birds are then quickly and safely analyzed after they are fitted with a metal USGS band. Bird Banding data is important in conservation initiatives to learn more about dispersal, migration, behavior, social structure, life span, survival rate, reproductive success, and population growth. Perhaps you’re familiar with Wisdom, a Laysan Albatross, the oldest known wild bird. She has already been observed looking after her egg with her long time mate on Midway this season. She is 67 years old this year and we know this from bird banding records! Maybe I should also share a Hawaiian Forest Bird example that blew my mind: The oldest known elepaio was a male Hawaii Elepaio in Hakalau Forest NWR who reached 23 years old! Who knew passerines could live so long?!?
I’ve been banding since 2002. I began by volunteering with Pocono Avian Research Center‘s MAPS and Project Owlnet. While working on my undergraduate degree I continued to help local conservation initiatives, many of which involved bird banding. I later landed a position at The Smithsonian Migratory Bird Center bird banding, conducting point counts, and delivering education programs about bird conservation.

We sure did began our day with excitement. The first bird of the morning was a juvenile Puaiohi, caught in an aerial mist net close to camp. We collected measurements, a blood sample, and a feather sample after fitting the bird with a metal USGS band and 3 plastic color bands. Puaiohi are a species of thrush endemic to Kauai, with an estimated population of less than 500 individuals. All the information collected from this newly banded bird will add to our knowledge, health, and status of the current population.
Other banding highlights of the day included Kauai Amakihi, Anianiau, Apapane, and I’iwi!
The rain unfortunately picked up pretty continuously in the afternoon, forcing us to close up our mist nets. We were all thankful to enjoy a relatively dry day, well, dry for the Alakai, one of the wettest places on Earth.